It was a good chance to put the new Turkish Gatling Crew in action. Lots of pictures!
Posted by Al Maurer at 5:11 PM No comments:

These aren't Ed's figures, they're mine. And I didn't paint them, Sean Tobin did. And then he put them on this cool base for display. He's a real artist!

Click on the image to see it really large. Figures are from a couple of different sets of Pulp Figures.
Posted by Al Maurer at 4:19 PM 1 comment: 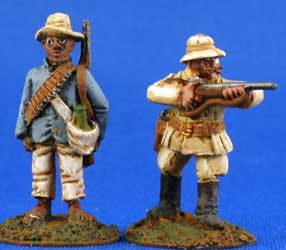 Ed has just released "Adventures in the Lost Lands" and needed some figures to game with. Ed gave me quite a list of figure ideas that could be used for any African safari game, whether going after dinos or wildebeest. The first two are above : a typical British retired colonel out to shoot anything that moves. He's firing his double-barreled shotgun while his gun-bearer totes the long rifle and all-important whiskey bottle.

From existing ranges we started out with some Ethiopians with rifles, below. They are painted in the standard way I paint basically all-white figures, just like the Foreign Legion in whites. Some have a light khaki color mixed in instead of the usual gray.

Then, since the Lost Lands are a bit primitive, I did up a number of Ethiopians with spears or swords. I had a good time making up as many different combinations of arms as possible. 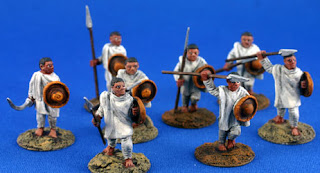 Then we needed some askaris. The Italian Askaris in shorts make a good all-around generic askari, so we used those. Base coat is dark gray, followed by Teddy Bear Tan and Linen highlights. I painted the fezzes with khaki covers but I might have painted them their natural maroon red. The figure on the left is from the Camel set, the three middle figures from ITA-2 Somali Askaris, and the NCO from the ITA-10 command pack.

All told, Ed has 25 figures so far. There are some more figures on the way. Happy hunting!
Posted by Al Maurer at 4:48 PM 1 comment:

Ed is about to get some of the new Egyptians I've just released. I think he's going to use them for the Larger than Life rules. It's a great pulp-type rule set.

Some of these guys are dressed in the Egyptian galibeyah, a loose nightshirt-looking kind of garment, while others are dressed in a hooded djellabah. Some wear turbans and others a fez--some fezzes have tassels and some not. Fezzes are always maroon, turbans white. The djellabahs are usually brow or gray. The galibeyahs can be white or colored with stripes. I'll do some of each.
Posted by Al Maurer at 9:30 AM 1 comment: 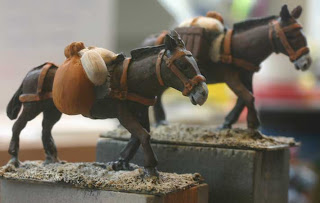 After finishing the "people" figures I did the animals--mules and donkeys. The Foreign Legion used quite a few mules in North Africa for carrying supplies, ammunition, mountain guns--even for troops in mule-mounted companies. These are general-purpose mules: and who doesn't need mules?

I painted these in a traditional overall brown color. I first painted the whole animal, base and all, in a very dark brown: Dark Burnt Umber in Folk Art colors or Nubian Flesh in Howard Hues (to my eyes they're identical except for the price.) Then I lighten mule with a mix of Burnt Umber, Yellow Ochre and a touch of Alizarin Crimson. It's the same combination as for a bay horse. The mane and tail are almost black with dark gray highlights. The muzzles and maybe the socks are light gray, the eyes are black and the hooves a dark gunmetal gray.

All the leather is, well, leather-colored brown with brass highlights on the buckles. (Hey, those buckles took a long time to model, so you'd better paint them!) Actually, the buckles are easy to paint by dry-brushing them. The wooden boxes are dry-brushed a medium brown, leaving that overall dark brown in the lines between the "planks." Paint the bags a variety of browns and beiges.

The donkeys, below, come in basically two colors. The most common is brown, much like the mules. Occasionally there's a white one--I did that one in light gray because the white mules are never really a pure white. The bags (as I saw them) were a kind of loosely-woven canvas or hemp in one piece that formed two large bags over the donkey's back. These could contain grain or dirt or any number of things that need to be moved. I painted these a light beige color for grain. The donkeys are patient and long-suffering little creatures that plod slowly along, prodded occasionally with the stick of the owner. No bridle or halter is used (or modeled). 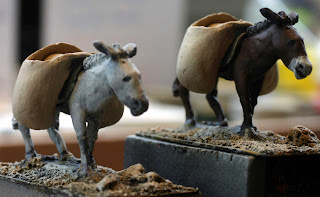 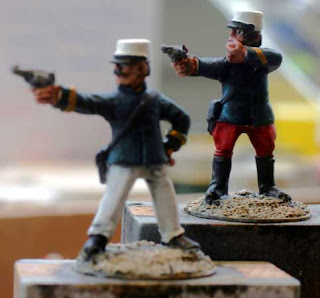 I tend to paint the command figures last, all together. This is partly because they lack the equipment of the troops and partly because the uniforms themselves are different. The officers above both have white-covered kepis, although you could just as easily paint them blue and red. The officer on the left wears a shorter tunic while the one on the right wears a different model--one often worn by senior NCOs. In fact, I've painted him as an NCO with a gold stripe near the cuff. NCOs in the Legion carried a whistle which he is blowing. And while the figure on the left wears white trousers over his boots, the one on the right has red riding breeches and boots. They could as easily be red and khaki or white, respectively. With khaki breeches and brown boots, he makes a nice post-WWI Legion figure. Lots of options. 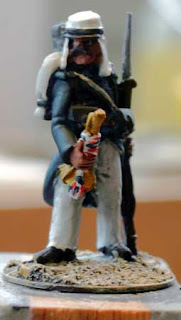 The Legion bugler (and corporal carrying the company fanion) really do have the same uniform as the troops and I painted them all together. But I did save the bugle, flag and drum for painting all together. The bugle cords are first painted all white then dabbed with blue and red to produce a red-white-blue twisted cord effect. 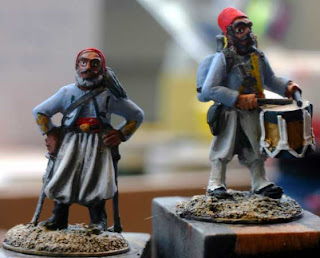 The Tirailleur command figures are also finished at this time. Like the bugler, I painted the drummer along with the troops but saved the brass-colored drum to do along with the bugle. 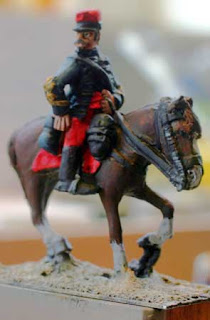 Finally, I finish the General. His uniform is the standard blue-black tunic with red breeches, red waist sash worn under the coat and a blue/red kepi. I chose not to paint the tunic as dark as I could have so that the black frogging would stand out more. As with the foot officers, the breeches or kepi could just as easily have been white. I hadn't painted one this way yet; hence my choice. The figure comes with a pompom on the kepi. That's useful if he's going to be painted as a cavalry officer; for a general, just clip it off.

I had glued the rider to the horse--something I don't usually do--and painted the horse first. So although the men are all complete, the animals are not. They're up next.
Posted by Al Maurer at 9:58 PM No comments: 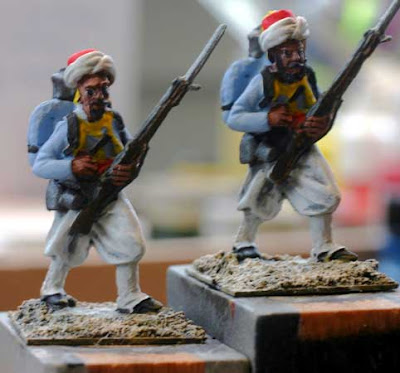 I saved this unit for last because I thought they were going t0 take the longest to complete and I wanted to get "warmed up" with the other units first.

Ed helped me out here. I asked whether he wanted the blue or white trousers and he definitely wanted white. After about 1882, all the units in Africa--Legion, Tirailleurs, Zouaves--wore white cotton trousers on campaign and also for daily wear in garrison or on exercises. The red or blue colored ones were still retained, however, as you can see in this postcard. 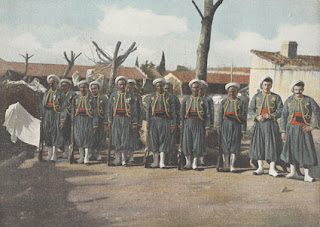 So what makes these Tirailleurs (and the Zouaves) so time consuming to paint? It's all that zouave-style trim on the coats and trousers. And not so much the trim itself as the color. Yellow just doesn't paint over blue (or almost any other color). So what I end up doing is painting the trim white, sometimes fairly sloppily. Then I go over the white with yellow. Finally, the light blue. If you look closely at the coats you will notice that the trim you see is mostly around the edges. That being the case, I do save some time by not painting the blue at all until the trim is done. If the trim around the false pockets or on the back seam is visible, the white and yellow sequence must be done after the blue--and then the blue might have to be touched up again.

The same is true for the red waist sash: it comes out much better undercoated with white. It's fairly prominent in the photo but the figures' stances do obscure it and the yellow trim somewhat. You can see different bits visible on the two different figures in the photos. 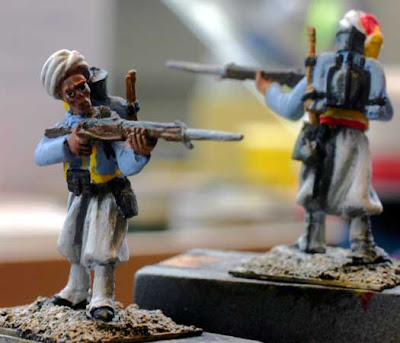 The order of painting follows the usual technique: inside to outside, light to dark. Here also we can divide the figure into upper (face and head) and lower (trousers down to base) and work alternately on these areas. This used to be important with slower-drying enamel paints but can also be helpful if the acrylic paints are still wet in crevasses or you really don't want alternate colors to blend.

Painting the equipment follows the usual technique for the French. The light blue color of the coat is painted everywhere on the top part since it is also the color of the roll around the pack. Then the pack itself and most of the equipment is painted black, followed by gunmetal gray for the metallic parts. Note again how the buttons and seams on the gaiters just pop out when a light drybrush of light gray is applied over the dark gray base.

Despite the time it takes to paint them, the Algerians are one of my top-selling units, as are the Zouaves, whose uniforms are identical except for the colors. In fact, I've actually worn out the first set of their molds and remade them this fall.

Numerically, the Algerians formed the largest body of troops in the Army of Africa and fought everywhere the Legion and the Zouaves did, even being combined with them in regiments de marche, temporary regiments formed for specific campaigns like Madagascar.

Ed did well to pick them for his army.
Posted by Al Maurer at 7:51 AM No comments: